The Berenice and Arthur Page Medal

The Berenice Page Medal was inaugurated by the ASA in 1972 in memory of Mrs Berenice Page, an exceptional amateur astronomer and foundation member of the Society. Although most ASA members are professional astronomers, Berenice and her husband Arthur, were readily accepted into the Society because of the indispensable part they played in the IAU Flare Star Programme in the 1960’s. Arthur Page remained an ASA member until his death in 2011 and, with his family’s agreement, the Society renamed the medal as the Berenice and Arthur Page Medal.

The ASA awards the Berenice and Arthur Page Medal for excellence in amateur astronomy in Australia and its territories. It is normally awarded every two years for scientific contributions by an amateur astronomer that has served to advance astronomy. 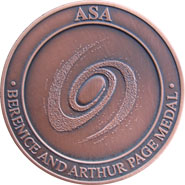 Above: The Berenice and Arthur Page Medal

The Berenice and Arthur Page Medal is presented at the biennial National Australian Convention of Amateur Astronomers (NACAA) by a representative of the ASA Council. The winner now also receives free Honorary Associate membership of the ASA.

The award is specifically for scientific contributions that have served to advance astronomy. While the amateur astronomical community benefits greatly from members’ organisational services, their popularisation of astronomy and their proficiency in established astronomical techniques, these qualities are not relevant to the award’s criteria. Self nominations are permitted.

The next Berenice and Arthur Page Medal is due to be awarded in 2024.

The award is specifically for scientific contributions that have served to advance astronomy. While the amateur astronomical community benefits greatly from members’ organisational services, their popularisation of astronomy and their proficiency in established astronomical techniques, these qualities are not relevant to the award’s criteria. Self nominations are permitted.

Nominations should be addressed to:

Further information can be found in the Conditions and Guidelines.

2022 – Two Winners: Mr Trevor Barry & the Backyard Observatory Supernova Search team (BOSS)
Trevor Barry – for broad range of planetary science, and in this particular case    observations of Saturn’s North Polar Hexagon over 3115 Earth days.                                                BOSS – for a coordinated, collaborative program with a focus on supernovae studies.
2020 – Mr Thiam-Guan ‘TG’ Tan
For his outstanding Perth Exoplanet Survey Telescope Observations.                                          2018 – Professor David Moriarty
For work on eclipsing binary stars and its application to models of stellar evolution.
2016 – Dr Roy Axelsen
For high-precision photometric observations and the Fourier analysis of Delta Scuti variables.
2014 – Mr Tim Napier-Munn
For work on binary stars systems and for demonstrating a deep understanding of observational techniques and processes that will progress the field.
2012 – Mr Anthony Wesley
For high quality observations of the Jovian and Saturnian atmospheres and the discovery of an impact cloud and atmospheric flash on Jupiter.
2010 – Mr David Gault
For significant observations of Pluto occultations.
2008 – Mr John Broughton
For his systematic survey for southern declination Near Earth Objects, including numerous occultation timings.
2006 – Dr Tom Richards
For his broad ranging CCD photometry lightcurve observations particularly of minor planets, variable stars and exoplanet searches.
2004 – Mr Colin Bembrick
For his significant contribution to astronomy from photometric observations of minor planets.
2002 – The Reynolds Amateur Photometry Team
For work in association with professional astronomers to provide data on objects such as supernovae, blazars and gamma ray bursts, using the Reynolds 30″ telescope at Mount Stromlo Observatory.
2000 – Mr Andrew Pearce
For his high quality visual observations of comets, variable stars and novae.
1998 – Mr Gordon Garradd
For significant contributions in the observation of asteroids, comets, novae and supernovae.
1996 – Mr Peter Williams
For his extensive on-going visual observations of variable stars, especially the R Coronae Borealis variables.
1994 – Mr Paul Camilleri
For discoveries of novae and Mira variables and the development of simple photographic techniques for nova searches.
1992 – Dr Mal Wilkinson
For the design and construction of a radio-telescope and subsequent observations of the Io-Jupiter system and for his development of a model for the emissions.
1990 – Mr. Barry Adcock
For telescope design work and planetary observations.
1988 – Mr. Robert McNaught
For photographic nova and supernova observations and discoveries.
1986 – Reverend Robert Evans
For visual discoveries of supernovae.
1983 – Mr. Byron Soulsby
For work on the oblateness of the umbral shadow.
1981 – Mr. Bill Bradfield
For the discovery, up to that time, of 11 comets.
1978 – no award
1975 – Mr David Herald
For observations of Baily Beads in the solar eclipse of 20 June 1974.
1973 – Mr. S.J. Elwin
For photometric observations of the occultation of Beta’ Scorpii by Jupiter.