The Harley Wood Lecture was inaugurated in 1984 as an annual lecture in honour of the first President of the Astronomical Society of Australia (ASA).

Harley Wood was Director of Sydney Observatory for over thirty years from 1943 to 1974, during which time the Observatory was engaged in the Astrographic Catalogue, a mammoth international project to photograph the whole sky. His work in the wider context of the Australian and international astronomical community was prolific. He was also heavily involved in the popularisation of astronomy and making astronomy available to everyone. In particular, he was at the forefront of moves to draw Australian astronomers together into a professional organisation and in recognition of this work became the Foundation president of the ASA.

A book is available on Harley Wood and his family’s life at the Observatory, written by Roslyn Russell. Copies can be obtained from the Sydney Observatory bookshop at $30 (recommended retail price).

Image: Harley Wood photographing the spectrum of a comet. 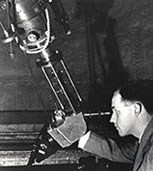